At Los Angeles Jewelry Buyer, we specialize in purchasing extraordinary ruby rings ordinarily sold at auction houses like Sotheby’s and Christie’s. If you have been wondering how to sell a ruby ring for cash, our estate jewelry buyers can help.

In this knowledge article, our Los Angeles jewelry buyers cover some of the common questions our clients have had when selling a modern or antique ruby ring for a generous cash offer.

1) What exactly is a ruby and what does “pigeon’s blood” mean?

Rubies are precious gemstones in the corundum family of gemstones. Their fiery red glow is due to traces of chromium (one of the scarcest elements on Earth). The term “pigeon’s blood” refers to rubies that display the most intense shade of color.

Some of the most legendary ruby rings to be sold at auction are from the Mogok Valley in Burma. Recently a ruby ring set with an 8.03-carat cushion-shaped natural “pigeon’s blood” ruby from Burma was sold for over 3 million dollars. It is important to note that a natural “pigeon’s blood” ruby is worth much more than similar one which has been heat treated to achieve that color.

2) Why is my cash offer so much less than the retail price of my ruby ring?

3) What aspects of my ruby ring will increase the cash offer?

There a variety of factors that can impact the cash offer for a ruby ring in Los Angeles. The important thing to keep in mind is that the value of your ruby ring is based primarily on the quality, origin, color, and carat size of the ruby. Color is the most important factor, with the most sought-after color being a vivid medium-dark toned red (sometimes with a purplish secondary hue).

In most cases, the band of your ruby ring will be melted down and sold at scrap prices in Los Angeles. The exception to this rule is if you are selling a rare antique ruby ring or it has been manufactured by a coveted fine jewelry brand like Van Cleef & Arpels, Tiffany & Co., Cartier, or Harry Winston.

4) Will I get a cash offer close to the appraisal value of my ruby ring?

However, if you take the ring to a Los Angeles jewelry appraiser and ask for a re-sell price estimate, you usually will be able to receive a cash offer that is closer to that price, depending on the accuracy of the appraisal.

5) Can I sell my ruby ring for a good price even if it is not accompanied by a lab report?

You can sell ruby ring or loose Burmese ruby to our Los Angeles jewelry buyers, regardless of whether or not your ring is accompanied by a lab report. However, if you do have a lab report for your ruby ring from a respected gems lab (such as GIA) do let us know because this will help us to evaluate the ruby’s correct value.

6) What about trying to sell my ruby ring on eBay?

While some people have success selling a ruby ring, necklace, or brooch on eBay, many more are not so fortunate. The reason so many people find it hard to sell ruby jewelry on eBay is that the world market is full of synthetic rubies and low quality rubies. Potential buyers are therefore legitimately worried about buying a fake ruby ring and low quality ruby jewelry online.

Sellers who are successful at selling a ruby ring on eBay are usually private individuals who have a long track record of successful sales and high ratings, or professional jewelers with a bricks and mortar store.

Contact our ruby ring buyers today to arrange a free verbal appraisal of your ruby ring or large carat Burmese ruby. You can also get the process started online by telling us about the ruby jewelry you wish to sell in the contact form below. 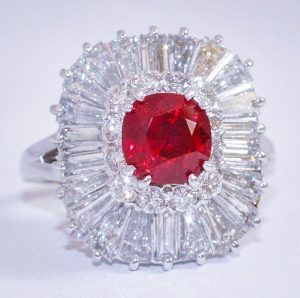 For centuries, rubies have been considered one of the most valuable gemstones on earth, prized for their distinguishing rich red hue and luster. Known as “ratnaraj,” or the “king of precious stones” in Sanskrit, rubies have traditionally been associated with love and passion, but also good health, power, prosperity, and wisdom.

With colors ranging from pale pink to a deep red with a hint of blue (known as “pigeon blood”), rubies are mentioned in ancient Sanskrit texts, the Bible, and even “The Travels of Marco Polo.” This birthstone for July is used in a wide variety of jewelry items today, and continues to make the bold and colorful statement that has made it coveted throughout the ages. No precious stone commands as much respect, or fetches as high a price, as the ruby.

Rubies are the red variety of the mineral corundum, one of the hardest minerals on earth, second only to diamonds. All other colors of corundum are sapphires, and though rubies and sapphires are identical in all properties except color, rubies have always been classified as an individual gemstone.

Pure corundum is colorless—it is the presence of small amounts of chromium that both gives rubies their color and limits the size of the crystal. The presence of chromium causes many tiny fissures and cracks to form inside the crystal, and only perfect geological conditions can lead to a ruby of more than two or three carats.

Rubies are judged by the classic four Cs of diamond valuation: color, cut, clarity, and carat weight, with color being the most important. The most coveted red is called “pigeon blood,” and though all rubies are red, they are pleochroic in nature, exhibiting more than two colors when viewed from different angles. Secondary hues in rubies can range from orange to purple, violet, and pink. Most rubies have some inclusions visible to the naked eye, though “eye clean” rubies do exist, and can command extremely high prices. Inclusions of slender, parallel rutile needles can cause a polished ruby to exhibit asterism, and these so-called “star rubies,” if transparent, are highly prized. Unfortunately, the same rutile inclusions responsible for asterism tend to decrease transparency and cause a hazy effect known as silk. Rubies that are dull and opaque can be fairly inexpensive, even when they display asterism.

Rubies are typically mixed-cut, with brilliant-cut crowns and step-cut pavilions. Common shapes include ovals and cushions, though rubies can be round, triangular, pear, and marquise shaped. Rubies that display asterism are typically cut en cabochon to highlight the optical feature.

Until the 19th century, every red gemstone was called a ruby. Spinels can rival the red color of a ruby, and even some garnets were once thought to be rubies. The “Black Prince’s Ruby” and the “Timur Ruby,” both jewels of the English royal crown, were actually discovered to be spinels in the late 1800s.

Learn About Gem Treatments for Rubies

Rubies are often heat treated to improve color and clarity. The heating process removes tiny internal flaws and inclusions, and has been used for many hundreds of years. Simple heat treatment is considered to be a stable and permanent enhancement, indistinguishable from natural heating processes, and is widely accepted as long as it is disclosed. For this reason, this kind of enhancement does not typically lower the value of the gemstone.

Truly clean stones that have not been heat treated can command extremely high prices. Other treatments, such as diffusion coloring, or filling imperfections with polymers or lead glass are much less acceptable, and typically devalue the stone. Part of the allure of rubies is the natural inclusions that make each stone personal and unique.

Learn About Legends of the Ruby

Throughout history, rubies have always been associated with royalty and wealth, and possessing a ruby was thought to restore vital life forces; increase energy and strength; and even protect the lands and possessions of the owner. When ground into a fine powder, rubies were ingested by some ancient cultures to cure blood diseases, stop bleeding, and treat indigestion.

Rubies also have been considered a stone that can protect soldiers, preventing wounds and making the wearer invulnerable to injury. Burmese warriors believed that the stone offered protection when physically inserted into the flesh, and ‘wearing’ rubies in that way made them formidable opponents indeed.

The rich glow of a ruby has been associated with an inner fire—an idea that led to the belief that when placed in water, rubies would make the water boil. Rubies were also thought to emit a light of their own, and when hidden in a wrapping, would shine through it to reveal its presence.

Sources of Rubies – The Burmese Ruby 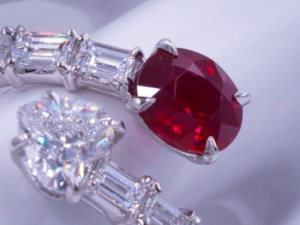 Rubies are found throughout the world, with different areas producing different characteristics. The most famous ruby deposits in the world are in the Mogok region of Myanmar, formerly known as Burma. Rubies from these deposits are famous for their “pigeon blood” color, and are often the standard against which all other rubies are judged.

Though fewer rubies have been found in the Mogok Valley in recent years, the area of Mong Hsu in Myanmar became the world’s main ruby mining area in the 1990s, securing Myanmar’s status as the best ruby producer in the world. Rubies have historically been mined throughout Southeast Asia, though the rubies from Thailand, Cambodia, and Vietnam typically contain more iron than Burmese rubies, and their color is not as highly prized.

Rubies were first synthesized in a laboratory in 1902 by the Verneuil process, named for its creator. Though synthesized rubies are difficult to distinguish from naturally produced gems, any reputable jeweler will be able to provide pertinent information on the origin of most individual stones.

One of the world’s largest rubies was donated to the Smithsonian’s National Museum of Natural History by Peter Buck, an American philanthropist and businessman. The Carmen Lúcia ruby is a 23.1 carat Burmese ruby, mined in the 1930s and set in a platinum ring. The stone’s exceptional clarity and richly saturated color make it one of the most prized rubies of all time.

The most expensive ruby in the world is the Sunrise Ruby, named after the poem written by the Sufi poet Rumi. The 25.6 carat Burmese “pigeon blood” ruby is described by the Swiss Gemological Institute as a “unique treasure of nature,” and was sold at auction for a record $30 million in 2015.

How to Sell Your Ruby Jewelry in Los Angeles

When it comes to selling previously-owned ruby jewelry, Los Angeles Jewelry Buyer is widely recognized as the best place in the United States to sell high-quality ruby rings, earrings, necklaces, and brooches. To learn more about why we have earned that reputation, please go to our article: How to Sell Ruby Jewelry.

You can also contact our jewelry buyers for a free consultation and appraisal of your valuable ruby jewelry.


Do you have sapphire jewelry that you would like to sell? Visit our page on: How to Sell a Sapphire Ring.