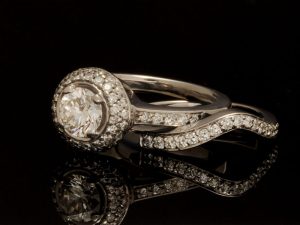 Natural diamonds are formed deep within the earth’s crust, and the tremendous forces they are subjected to often result in imperfections that can compromise the diamond’s quality. While nearly perfect diamonds do exist, they are rare and command accordingly high prices. As a result, some diamonds are subjected to treatments to enhance their color, their clarity, or both, in an effort to make them more marketable.

Most diamond treatments are unstable, meaning that they are not permanent and are reversible. Because of this, the internationally accepted rules for diamond grading forbid the certification of treated diamonds (aka enhanced diamonds), with the exception of laser drilling. When treatments are used on diamonds, it is imperative that they be fully disclosed and described.

Natural diamonds often have visible dark inclusions—small imperfections of graphite or sulphide that form as the diamond is formed. If the diamond has surface reaching black inclusions, it can be treated with acids to bleach the inclusion without affecting the diamond material itself. When an inclusion is ‘sealed’ within the diamond, laser drilling is a method used for reaching the inclusion. A hole is drilled with a high-power laser beam from a point on the surface of the diamond to the inclusion, creating a very small channel that will allow the strong acid to reach the dark inclusion and make it less visible.

Internal laser drilling, also known as KM treatment, involves focusing a hot laser on the inclusion itself without boring a small hole. The heat from the laser causes the dark inclusion to expand and create small channels to the diamond’s surface. Once these channels are created, a strong acid can be used to bleach and eliminate the dark inclusion.

Laser drilling is one of the more common treatments seen in diamonds, though they represent only a modest percentage of all diamonds on the market. This treatment is usually only detectable under microscopic inspection, as the tiny bore holes do not affect the diamond’s overall brilliance. Laser drilled diamonds are allowed to be certified because the treatment is considered permanent, and will not revert back to its pre-treated state, but the treatment must be clearly indicated on any diamond certificate. Laser drilling can improve the appearance of a diamond, but it is much less valuable than an untreated diamond.

Another way diamonds are treated to enhance their clarity is with fracture filling. In this process, a clear resin is injected into a diamond’s feather-like fissures, or some diamonds may be drilled first to reach a fissure that doesn’t reach the surface. The resin filler allows light to pass through rather than reflect off the fracture, making it less visible.

A trained gemologist can identify a fracture filled diamond using magnification by identifying gas bubbles and other foreign textures within the diamond. The texture of the filling material can result in the presence of a flash effect, or bright streaks of color from the filled fracture. Fracture filling is not a stable diamond treatment, and is easily compromised by heat. As a result, diamond grading certificates are NOT issued for fracture filled diamonds.

In this treatment, diamonds are subjected to high heat and high temperatures, simulating the forces exerted on them as they were formed in the earth, causing changes in the diamond’s structure and appearance. Some diamonds become colorless with this treatment, while others change to yellow, greenish-yellow, pink, or blue.

The use of the HPHT process to “decolorize” a diamond is only effective in a small number of diamonds, but with certain colored diamonds, particularly yellow-green diamonds, HPHT treatment is more prevalent. HPHT treatment is considered stable and permanent, and is the only color treatment the Gemological Institute of America will issue reports for, prominently disclosing its use.

Diamonds are sometimes exposed to various types of high-energy particles that alter their internal atomic structure and, as a result, their color. The degree of color change is dependent on the type and duration of irradiation, as well as the original quality of the diamond itself. Once irradiated, the treated diamond is often annealed, or heated to moderate temperatures to deepen the color. Irradiated diamonds are difficult to identify and require advanced testing by a competent, recognized gem laboratory.

Surface coating consists of adding a thin layer of colored material to the surface of the diamond, either masking or enhancing the stone’s original color. Early coating techniques were as simple as using paint or ink on a diamond’s girdle, but modern practices include thin optical or chemical films. Surface coating is NOT considered an acceptable treatment, and is easily detected by a trained gemologist in a laboratory.

Where to Sell a Natural Diamond in Los Angeles, CA

If you own a large carat diamond ring that you would like to sell for a fair and substantial cash offer, contact Los Angeles Jewelry Buyer today. We are widely recognized as the best place to sell a diamond in the country, and our diamond buyers specialize in high-quality natural diamonds with appraisal values into the five and six figures.