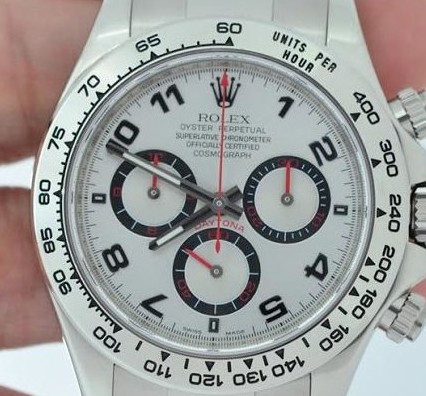 At Los Angeles Jewelry Buyer, we are fascinated by the history of fine jewelry and watchmaking. In the following brief history of watches and watchmaking, we cover some of the important highlights along the horology timeline.

The history of watches begins in 15th century Europe, with the invention of small, portable clocks. These “clock-watches” were made possible by the invention of a mainspring, a metal ribbon that could be wound to store energy.

The mechanism of the watch, called the movement, consisted of a mainspring that turned gears to move the hands, and a rotating balance wheel to keep time.

Early examples, called “Nuremberg Eggs,” were developed by Peter Henlein of Nuremberg, Germany. About the size of an apple, Nuremberg Eggs were worn around the neck or pinned to clothing, and featured only an hour hand. These miniature timepieces functioned essentially as jewelry for the elite, and were prized for their fine craftsmanship, ornamentation, and design.

By 1541, John Calvin’s protestant reforms impacted much of Western Europe, including Geneva, Switzerland. The reforms also impacted the history of watches because of a ban on any outward show of wealth. With extravagant display now prohibited, the talented jewelry makers of the day turned their focus to watchmaking.

Refining the Basics of Watchmaking

Watchmakers for the next few centuries simply refined the basic mechanics of the watch. One challenge involved the escapement—the mechanism that transfers energy from the main spring to the time keeping element.

As the spring unwinds, the force it provides decreases. The balanced spring was developed by Robert Hooke and Christiaan Huygens in 1657, increasing accuracy to within minutes per day. The first minute hand appeared in 1680, and a second hand was developed by 1690.

The tourbillion is considered the highest achievement in the history of watchmaking, and is proudly featured in many of today’s finest luxury watches.

Britain led both innovation and market dominance in watchmaking through the 17th and 18th centuries. British watches were highly accurate but, reflecting a Puritan aesthetic, were bulky and plain. The Swiss built a wider range of watches, and maintained their reputation for highly desirable, fashionable products.

British and Swiss watchmakers built watches in small batches, mostly by hand, and they sold their lowest quality watches to the growing American market.

Now, it was time for the United States to exert it’s influence on the history of watches. By the 1850s, Americans began to use automated machines to mass-produce watch parts. This “American System of Manufacturing” allowed the Waltham and Elgin companies to produce watches that were as good as any but the finest hand-made watches of Europe.

When Swiss watch exports fell by 75 percent in less than 10 years, they sent a representative to the United States to investigate. The Swiss representative saw Waltham’s automated screw machine turn a spool of wire into perfectly matched, tiny screws. This led to more automation in Swiss watchmaking, though not to the level of the Americans.

One drawback to the American system was that each part required a machine to make it. Complicated watches, such as minute repeaters and chronographs, were not practical to manufacture. Swiss craftsmen kept the majority of the high-end watchmaking market.

By 1900, the time keeping demands of the American railroads led to huge sales in the United States. Elgin and Waltham produced over a million watches in each of their strongest years.

The Introduction of the Wristwatch

The wristwatch originated in the 16th century, but only became popular much later. The need for careful coordination between troops in World War I gave rise to rudimentary wristbands holding small pocket watches. These soon evolved into true wristwatches, and became indispensable pieces of military equipment.

Louis Cartier pioneered the aviator’s watch in 1904 with a design for his friend, flying pioneer Louis Santos-Dumont. After the war, the returning servicemen made wristwatches fashionable, and soon most men wore them.

The Swiss, early proponents of wristwatches, began to dominate the new market. Led by Hans Wilsdorf of Rolex, the Swiss improved the accuracy and reliability of wristwatches. Later models were resistant to dust and shock, and the first waterproof watch was developed in 1926.

By the 1950’s, the Swiss produced more high end, complicated wristwatches than anyone in the world. Their watches featured day-date calendars, stopwatches, and the first self-winding mechanism.

The American’s high level of automation wasn’t suitable for building complex watches, and one of the only American companies to survive was Timex. One other American company, Bulova, developed the Accutron in the 1960s, which used a tuning fork instead of a rotating balance wheel. The result was a highly accurate timepiece that foreshadowed the upcoming quartz revolution.

The history of watches turns mass market with the quartz revolution. The first quartz wristwatch was developed in Switzerland, but it was the Japanese who capitalized on the new technology. In a quartz watch, varying electrical voltage applied to a quartz crystal changes the crystal’s shape and creates a highly regular oscillator.

Japan’s Seiko built the first quartz watch in 1969. In less than a decade, 100 years of mechanical watch dominance ended.

Quartz movements can be inexpensively mass-produced, and are as much as ten times more accurate than mechanical movements.

At Los Angeles Jewelry Buyer, we are committed to providing clients with superior cash offers for their previously-owned fine timepieces, as well as sharing our deep knowledge and experience. While we are based in San Diego County, we serve clients nationwide. If you are interested in selling a luxury timepiece, please go to the following page: Sell a Watch in Los Angeles.